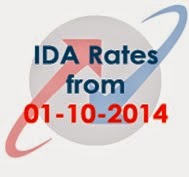 BSNL Employees Industrial Dearness Allowance (IDA) Rates from 01-10-2014 to be increased highly above 6%…
All India Consumer Price Index (IW) is based on weighted average of prices of consumer goods & services calculates on average for specified months of June, July & August 2014 issued by the Department of Labour Bureau by taking price changes for each item in the predetermined basket of goods.

Now, as per All India Consumer Price Index Numbers for Industrial Workers - CPI(IW) issued by Department of Labour Bureau, CPI has been increased to 246 for June 2014 and also recorded an increase of 6 points in CPI Index for July 2014 and stood at 252, with a total increase of 8 points which is to be taken for October 2014(01-10-2014) Industrial Dearness Allowance (IDA) rates.

Based on this average of Consumer Price Index Numbers for Industrial Workers-CPI(IW), Industrial Dearness Allowance (IDA) rates of BSNL Employees to be increased upto 6.6% which raises to 97.9% from 1st October 2014 from existing BSNL IDA rates.

If 1 point increase in AICPI index records, will lead to 6.9% IDA increase, where a drop of 4 points in AICPI will result in an increase of 5.5 % from present Industrial DA (IDA) rates of BSNL employees from 01.10.2014.

The expected increased IDA rates @ 6.6% or above/decrease for BSNL PSU employees from October 2014 has been confirmed after getting average price index number of August 2014 on 30-09-14, then after Department of Public Enterprises will issue the orders for increased IDA rates from 01.10.2014, and have a look for old Industrial Dearness Allowance(IDA) rates from 01.01.2007 of BSNL Employees.